Many lunar years ago I made my only trip to China. Already a bit bored by Cantonese a la carte cuisine as it was then served in the United States, I was expecting some kind of if-this-is-what-it-is-meant-to-have epiphany.

It might have to do with the fact that we were closely watched and probably taken to restaurants that were considered safe for foreigners. Or maybe I just needed a little more palate practice to grasp the intricacies of cooking. Fortunately, the often difficult cuisine of the Sichuan and Hunan provinces has finally made its way to American shores, making regional Chinese dishes interesting again. But that was also a long time ago.

If, like me, you often need a quick kick in the keister to re-energize your appreciation for a kitchen gone cold, may I suggest Best Quality Daughter? Let me also suggest that when you visit the Pearl’s new restaurant, you start with the tantalizingly tingling Honey Fried Peanuts. They’re like a praline with the added kick of numbing Sichuan peppercorns. Topped with a tangle of red chili threads, they’re utterly addictive and a fiery companion to the floral yet earthy Tapei Personality cocktail with scotch and chrysanthemum syrup or Singing Gin Sing with lychee and walnut juice. roasted coconut. The pair were the two best of three cocktails we tasted on a recent visit. 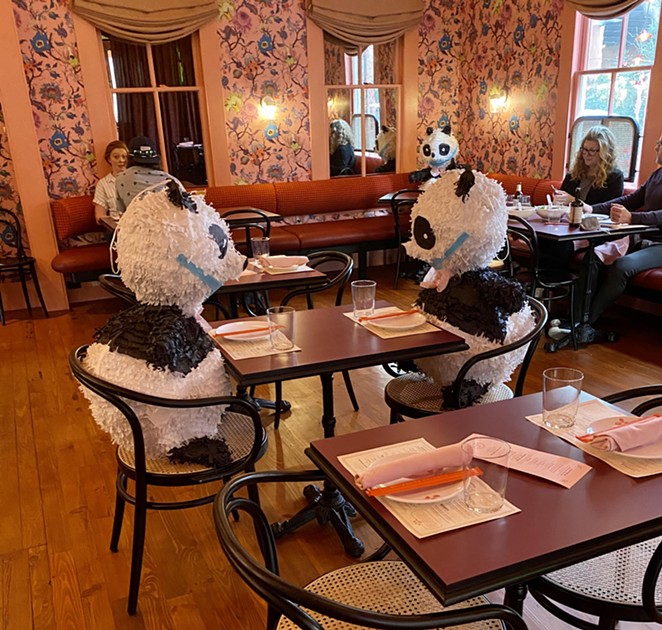 To be clear, early press releases characterized BQD, named after a scene in Joy of Luck Club, as an “Asian-American concept,” thus giving owners Jennifer Hwa Dobbertin and Quealy Watson — the pair also own Tenko Ramen in Pearl’s bottling department — more freedom in the kitchen. In an age of pitched battles over who represents which cuisine, naming has become increasingly important.

Despite the hyphenated descriptor, the restaurant’s dishes that sound directly Chinese are the ones that catch the eye first. The gai lan (Chinese broccoli) with oyster sauce is one such example, and it’s executed with a clarity and creativity—oh, those crispy shallots—that make you look at it again. This western palate could have used a few flakes of finishing salt, but their absence is only incidental.

There’s salt in appropriate abundance in salt and pepper prawns, a dish that has proven disappointing in lesser kitchens. The full portion is meant to serve a happy family of three, but the half order is quite sufficient for two or more. We were warned about the shell, but there was only the tip of the tail to contend with, and it was just slightly crunchy. There wasn’t even a hint of grease. The creative kick of this dish is its juxtaposition with a Thai-inspired, galangal-accented dip. Even the most vehement anti-revisionist could not complain.

The pairing of Thai and Chinese seems tame when contemplating the snack that is their Sizzlin’ Rice Chips, served with Thai curry baba ghanoush – and parmesan cheese – for an Asian-Middle Eastern-Italian mashup that could have been excessive. Still, the freckled mountain of cloudy light shavings of black sesame seeds was perfectly happy to play in the surprisingly warm and comforting bath. The irreverence of the cuisine breeds guessing games from the restaurant, and we collectively detected a hint of sweetness that could have been maple syrup or brown sugar.

The name dan dan, which means hawker noodles carried on a pole, does not in itself suggest preparation, but most of us have become accustomed to the combination of springy noodles with ground pork in a light but fiery coating to chilli oil base. That’s not the case at BQD, where the noodles and pork remain but the sauce again benefits from ties with Thailand. Evoking coconut milk and makrut lime leaf, Panang’s creamy curry totally upends expectations, but in a provocative way.

Thai chili “jam” was a necessary accompaniment to the, again, unexpected combination of crab pudding with Oaxaca cheese in the eponymous spring rolls. Call them a good try that missed the mark. The equally odd pairing of chorizo, egg, and breakfast taco cheese in potstickers with “tangy, tangy salsa” will have to wait another day. Robust and comforting, a plate of fatty noodles with short ribs featured quality ingredients, but with a flavor profile dominated by the five spices, it seemed to lack the creative verve of most other offerings. Split steamed buns are fried to serve as savory supports for ice cream and sorbet in the two desserts on offer. The highest quality status goes to the sublime lychee.

If you’re sitting outside like we were, take a tour inside BQD. He has abundant visual verve. Pandemic-appropriate piñata pandas served as places on alternative tables in a dining room, while custom wallpaper with quirky local landmarks livens up the bar. If ever this paper should be replaced, BQD does not have to be ashamed to add itself to the list of landmarks.

The lean: Best Quality Daughter brings a refreshing take on Asian-American cuisine to The Pearl. Overseen by the team that runs the bottling department’s Tenko Ramen, familiar-sounding dishes such as gai lan with oyster sauce and salt-and-pepper shrimp take on new life, and creative mashups such as potato chips. baba ghanoush thai curry rice and dan thai curry dan noodles raise both eyebrows and expectations.

So many restaurants, so little time. Get the latest San Antonio restaurant news with our Flavor Friday newsletter.

With the aisle seat legroom and the window seat view, every chair and bar stool at Elevation 89, a new American cuisine restaurant at Ocala International Airport, is desirable. Guests occupied tables overlooking the airport tarmac on October 15, watching with childlike fascination the plane take off onto the runway against a clear blue sky. […]

December 28 – Scattered across the Atlanta Freeway, restaurants with authentic Mexican, Dominican and Salvadoran flavors have served Gainesville residents for more than two decades. While some are well known for their unique flavors, others are some of Gainesville’s best-kept secrets. As the old saying suggests, the path to a person’s heart is through their […]

Looking for Native American cuisine? You need to head to Toppenish

D-Rez and I were supposed to make a stop in Toppenish, WA today, so I thought while we were in town, we should stop for lunch at A&B Native American Cuisine, the home of the Indian taco! I’ve heard good things about it and having never tried fried bread, I was set! Have you ever […]